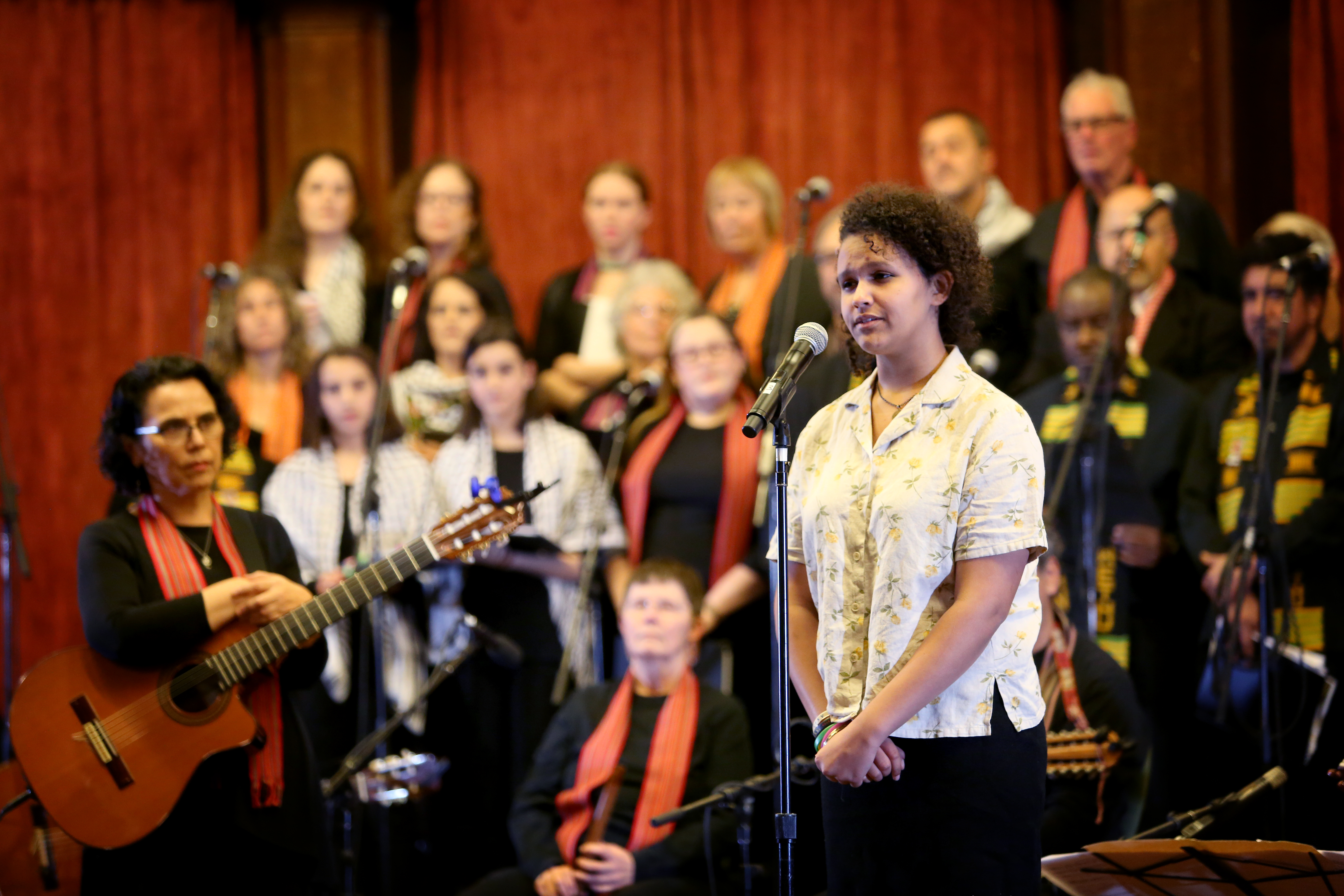 Akonadi Foundation’s Beloved Community Fund supports free public art and cultural events that use art and culture to build voice, power, and self-determination in communities of color. We are lifting up the work of our grant partners through a monthly spotlight series; for our February installment, we feature Zawaya and their Executive Director, Nabila Mango.

Nabila Mango, Founder and Executive Director of Zawaya, sat down with us to talk about Zawaya and what draws her to the work.

My initial desire to create Zawaya was born out of a deep love for Arab music and a lifelong passion and commitment to community work. My vision was that music, as the universal language that crosses all barriers, could be the perfect medium to bring people together and encourage inter-community understanding. In addition, I was interested in empowering the Bay Area Arab community, especially after 9/11, by providing them with a voice, hence the name Aswat, that celebrates their culture and artistic heritage. I am committed to using this powerful language as a tool to foster inter-community and inter-personal understanding and am inspired every day to find ways to bring people together through an exchange of artistic knowledge. Music is the perfect cultural representative; through its rhythms and modes, it showcases the soul, and through the poetry in song, it tells of the rites and rituals of any given group of people.

How does your work with Zawaya affirm and celebrate the collective memory, shared histories, or social identities of Oakland’s communities of color?

Nabila Mango: In the 18 years since Aswat’s inception, we have welcomed members from all Bay Area communities. In the last three years, we have expanded our vision to foster inter-community dialogue through building collaborations with other Bay Area music groups, such as Vukani Mawethu, who are an Oakland based nonprofit multiracial choir which sings the freedom songs of Southern Africa. This type of collaboration celebrates the parallel struggles of communities of color, including the Palestinian community, the larger Muslim community, and the African-American community.

Aswat has also collaborated with San Jose Taiko in several performances to commemorate the historical injustice against Japanese-Americans through Executive Order 9066, which ushered in the internment period. These performances also shed light on the recent injustices against  Muslim-Americans through Executive Order 13769, which restricted travel & immigration from several Muslim-majority countries under the guise of protection from terrorism.

Bringing these two musical genres together with Zawaya is an invitation to the larger Bay Area community to share in the richness and cultural beauty of each other through music, that we will build strong foundations of acceptance for now and the coming generations. With Oakland facing rising gentrification and communities of color being pushed away from their home-town, it is important to us that shows are based in Oakland. Personally, our concerts are a manifestation of our collective desire to resist fear, hatred, and injustice as an expression of love, hope, and healing for our struggling communities.

What is the vision that guides your work and what will Oakland look like if you are successful?

Nabila Mango: It is Aswat’s vision is to achieve cross-cultural communication and understanding through the universal language of the Arts. My personal vision and hope is that Aswat’s concerts not only inspire the performers who are already committed to social justice, or those audience members who come in support of diversity, but also to inspire others to learn more about the rich and expansive culture of communities in Oakland and the Bay Area.

Nabila Mango: This year Aswat will continue its yearly tradition of putting together a show on May 5th catered toward the Arab community. This year’s spring concert will be a celebration of the pop music culture of the 80’s and beyond in the Arab world. In addition, Aswat will perform the final show from its on-tour concert, “Notes Against the Ban.” After sold-out performances in Oakland, San Francisco, Pleasanton, and Santa Cruz, the final show will be in Palo Alto, and as such Aswat would have fulfilled its vision of taking this concert across multiple communities in the Bay Area to shed light on the injustice against Muslim-Americans under the current administration.

Beyond the spring season, Aswat is looking into a Sufi Music Program, which will be celebrating the Sufi musical heritage that originated in Syria and was subsequently adopted and translated in Turkey. This program will serve to shed light on the beautiful and often-misunderstood areas of Islamic art and culture, in another attempt to showcase the richness of Islamic traditions. It will also serve as a love letter to the Syrian people and refugees by showcasing and preserving an enduring and unique aspect of their cultural heritage.

Akonadi Foundation strives to eliminate structural racism that lies at the heart of inequity in the United States. We work towards a racially just society by funding organizations and leaders fighting on the ground through grassroots organizing, culture shift, and policy change. Find out more about Akonadi Foundation’s Beloved Community Fund here. 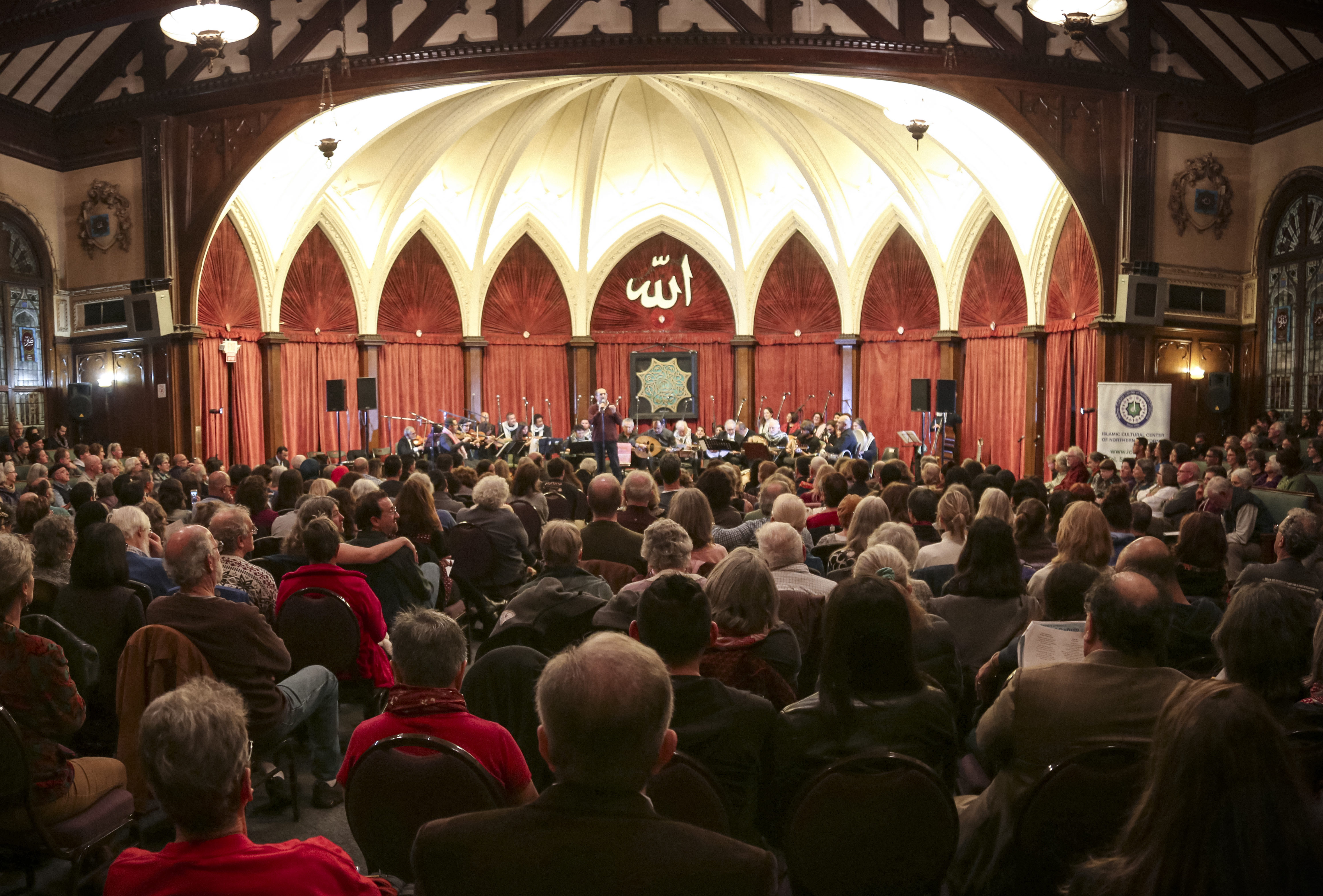