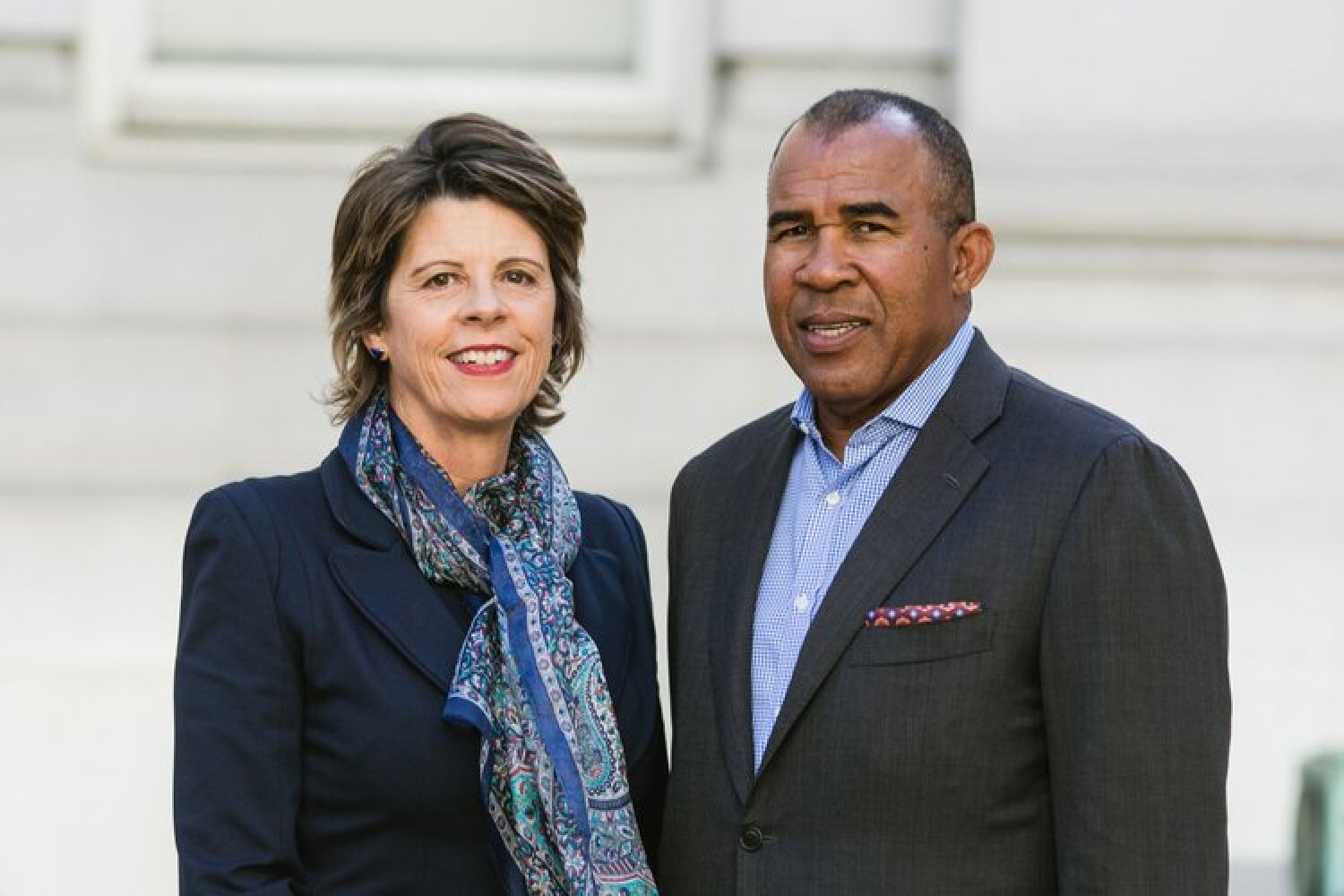 Based in Oakland, California, Akonadi Foundation is on a mission to support the development of powerful social change movements to eliminate structural racism. Named after a goddess and oracle from Ghana, the foundation was launched in 2000 by couple Wayne Jordan and Quinn Delaney. They did so on the heels of the controversial passing of California’s Proposition 21, which increased a variety of criminal penalties for crimes committed by youth.

This wealthy progressive couple have their hands in a lot of baskets, and not too long ago, I wrote about Delaney’s support for The California Donor Table (CDT), which uses 501(c)(4) funding from a community of donors to pool and align investments in leaders, groups and systems toward lasting progressive political change. Jordan, meanwhile, has directed funds to progressive candidates and causes for decades, powering the likes of Barbara Boxer and Bill Bradley. The couple were early backers of Stacey Abrams, and among Barack Obama’s earliest supporters in California.

But who exactly are Jordan and Delaney, how does Akonadi Foundation operate, and what can we learn about the state of progressive power-building from its grantmaking?

The changing racial makeup of the nation has and will have major implications for the philanthropic sector. By 2050, America will be majority non-white. And while, historically, the largest sums have been given by white men, this does not mean that people of color won’t play a larger part in the story down the line.

The low-profile real estate investor Wayne Jordan is one such figure. In 1998, he launched Jordan Real Estate Investments, an Oakland-based, privately held investment firm focused on both commercial and residential properties in major U.S. markets. The firm’s holdings include office buildings in San Francisco and Oakland as well as apartment buildings in Oakland and Washington, D.C.

“I love real estate investing in Oakland and I’ve done that for the last, I think, 22 years… and what else? I love my wife,” Jordan told me in a recent interview alongside Quinn Delaney.

Growing up, Jordan said his parents gave money to their local church, as well as to neighbors and relatives. Delaney, armed with degrees from Pitzer College and University of Houston Law School, is a longtime lawyer and heavily involved with the ACLU.

The couple first got their feet wet through the Tides Foundation, where they set up a donor-advised fund. “We had been working with a number of fantastic advisors and had learned a lot about the Bay area, and about how you do philanthropy,” Delaney said. Through this apparatus, they funded groups that serve Black youth and girls of color.

Eventually, the family decided that they wanted to interact more with the organizations and leaders they were funding. And moving toward a broader social justice mission, the couple said, was a natural outgrowth.

Akonadi Foundation was launched in the wake of Proposition 21, which the duo call “racist policy” in no uncertain terms. Among other things, the measure prohibited the use of informal probation for juvenile offenders who commit felonies and required more juvenile offenders to be tried in adult court.

Last summer, Akonadi, which has been a significant racial justice funder for some two decades now, committed $12.5 million to an initiative it calls All in for Oakland, which aims to end the criminalization of Black youth and youth of color. The effort will create “an ecosystem of movement organizations that are mobilizing and organizing directly impacted people to win police-free schools, fix school discipline, close youth prisons and realize other critical outcomes to transform youth justice in Oakland.”

Through All in for Oakland, Akonadi is backing organizations like Urban Peace Movement, Young Women’s Freedom Center, and Black Organizing Project, which spearheaded a successful push to defund school police in the Oakland Unified School District. Dubbed the George Floyd Resolution to Eliminate the Oakland Schools Police Department, that effort is a good reminder that while Akonadi funds work at the local level, these issues reverberate around the country.

Overall, Delaney said, Akonadi looks for a couple of key things in its grantees. One is that the organization is really truly grounded in the community it claims to be working for. As was the case during their Tides Foundation days, the couple are also looking for strong and compelling leaders.

Akonadi is known for its multi-year support, which Jordan and Delaney believe is critical for these small grassroots organizations. This philosophy reflects current thinking among many progressive foundations, and we’ve heard numerous philanthropic leaders stress that point recently, including Carmen Rojas of the Marguerite Casey Foundation.

“You have to make a commitment so that they can do their work and know that the funding will be there year after year,” Jordan said. “So when you make that commitment, it actually helps them to focus on what they’re trying to be effective at and not just always focusing on raising money every year.”

In 2016, the foundation’s board of directors appointed Lateefah Simon as president of Akonadi. As dynamic a figure on the stage during TED Talk as she is on the ground, the MacArthur Fellowship awardee came to the foundation after working at the Rosenberg Foundation, the Lawyers’ Committee for Civil Rights of the San Francisco Bay Area and elsewhere.

Simon got her start in the nonprofit space when she was still in her late teens, working with what is now called the Young Women’s Freedom Center, a San Francisco nonprofit led by young women impacted by incarceration and other public systems, including the foster care system. Simon was on juvenile probation at the time, but had the opportunity to join the center as a full-time organizer.

“Like many kids around the country who people perceive are making bad choices, a lot of kids are making life-or-death choices to either support or defend or take care of their families. And so having the opportunity to work as an organizer allowed me to do several things… including go back to school,” Simon told me.

Quite open about her story, Simon told me that the bulk of her family suffered from crack cocaine addiction, which swept across San Francisco, Detroit, New York and other urban centers during the 1980s. “I blinked my eye and my whole world, everyone in my family, was addicted,” she said.

Simon found a safe space in the center, gaining leadership skills and an understanding of how the nonprofit world worked from a young age. A few years later, as a single mother, she stepped into the executive director role without missing a beat and helped create San Francisco’s first reentry services division—under the leadership of a certain district attorney named Kamala Harris.

As president of Akonadi, Simon now supports the very same organizations that she felt empowered by, working with promising leaders in communities she’s known all her life. And she believes that philanthropy can evolve to become a better ally to racial justice groups by giving them more resources and opening the doors to relationships that can speed advancement.

“For the organizations we’re no longer funding…. what we do is raise money and leverage other resources,” she said. Akonadi is a small family foundation—the charity has given away around $3 million annually of late—and Simon calls it the “Jerry Maguire” of racial justice funders, deploying its own funds, but also connecting with philanthropies to do broader work.

Simon launched the Leading Edge Fund during her Rosenberg Foundation days to “seed, incubate and accelerate bold ideas from the next generation of progressive movement leaders in California.” Now, with backing in part from Akonadi, the fund’s 2019–2021 fellows include leaders like Eddy Zheng of New Breath Foundation, who focuses on transforming opportunities for incarcerated Asian American and Pacific Islander people.

Delaney recalls a time when a number of Akonadi grantees worked to change Oakland Unified School District policy to mandate that all students have access to classes covering the so-called “A–G” high school requirements, necessary to apply to the prestigious University of California system. “Prior to that, they only offered some… but the upper-tier classes weren’t offered at all high schools. So certain students were completely precluded from even applying to the UC system. That was a long campaign, and they were able to get that passed.”

This is the kind of long-term work that Akonadi is engaged in, with a track record of serving certain organizations since their inception. Over the last two decades, the foundation has given over 1,900 grants totaling $43 million to nonprofit organizations, primarily in the Bay Area. The foundation also runs several funds. Its So Love Can Win Fund provides general support grants of $10,000 to Oakland’s organizers, storytellers, culture bearers and healers who seek to ignite and implement a radical collective vision of freedom and racial justice.

Belonging In Oakland: A Just City Cultural Fund, meanwhile, is a new multi-year program that will fund Oakland cultural practitioners of color to radically imagine a racially just city. The fund is a unique public-private partnership between Oakland’s Cultural Affairs Division, Akonadi Foundation and the East Bay Community Foundation (EBCF). Going forward, Akonadi will exclusively back some of these funds, and also collaborate with other larger institutions.

Away from Akonadi, Jordan and Delaney are also active in the donor organizing space. Delaney is a member of the Women Donors Network, known for its pooled grantmaking, while Jordan is a member of Donors of Color, a collective ofhigh-net-worth donors building community power to win systemic change around racial equity. So far, the couple’s kids are not yet involved with the foundation, but Jordan and Delaney expect that will change down the line.

More than two decades ago, when the couple first started talking about dismantling structural racism, “Many in philanthropy had no idea what we were talking about,” Delaney said. “But now, that’s a term used by everybody.” Jordan and Delaney recognize that this doesn’t necessarily mean that funding always follows, but they also think that at least amongst a small cadre of foundations, there is a true recognition for the need to do movement building. And they are hopeful that the ranks of those donors and foundations will grow.