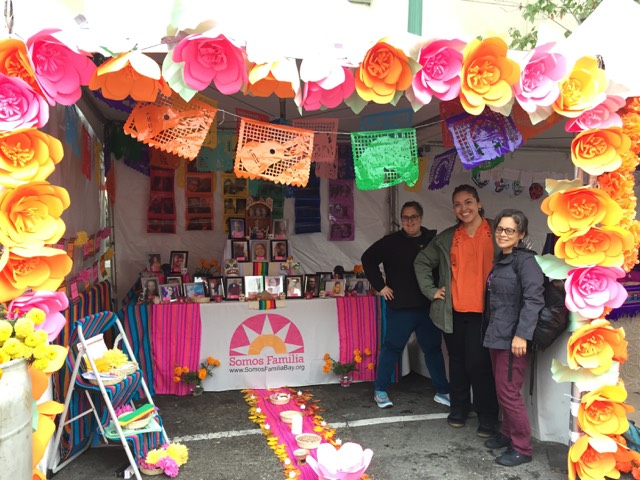 Akonadi Foundation’s mission is to eliminate structural racism that leads to inequity in the United States. Using an ecosystem grantmaking lens, Akonadi supports and nurtures grassroots organizing, culture shift, and policy changes that build Oakland’s racial justice movement. We are lifting up the work of our grant partners through a monthly spotlight series; for our April installment, we feature East Bay Community Law Center and Somos Familia.

Maritza Martinez talks about her work with Somos Familia as an organizer:

The mission of Somos Familia is to create support and acceptance for Latina/o/x lesbian, gay, bisexual, transgender, queer or questioning youth and their families so that youth of all sexual orientations, gender expressions and identities are accepted and celebrated by their families and communities.

Personally, why are you a part of this organization? What draws you to the work on a personal level?

For me as queer Cuban-American as well as for many Latinx youth, having family accept and support us is something we desperately wished for (Supporting and Caring For Our Latino LGBTQ Youth). Thankfully, my Catholic Cuban family embraced my partner and me as part of the family. I feel extremely grateful and fortunate for their love and acceptance.

Before being introduced to Somos Familia, I had never seen a Latina mom openly proud of their LGBTQ child. I had met some accepting family members and some rejecting family members but never a parent proudly proclaiming their child is LGBTQ. But it wasn’t until I heard Mirna, Dolores, and Susana — in Somos Familia’s video Tres Gotas de Agua — tell their stories that I realized the power families hold in transforming our communities. Since I began working with Somos Familia, I have been constantly surprised and moved by the power of families to affect change.

How does Somos Familia affirm and celebrate the collective memory, shared histories, social identities, and cultures of Oakland’s communities of color?

Many Latinx cultures have strong traditions expressed through storytelling, both oral and written. Somos Familia harnesses these traditions to showcase new original works covering gender identity, queer identity, and the challenges of finding queer spaces as a youth and a person of color.

Somos Familia has worked with filmmakers, writers and youth poets in the past as part of our community acceptance work. We have worked with filmmakers to complete and showcase films about family acceptance in Latinx families, such as Tres Gotas de Agua, El Canto del Colibrí, and Raising Zoey. We have provided space for youth poets to perform their works to expand the community’s understanding of their experiences. In the last year, we also worked with volunteers to create an animated series, Entre Nos, about coming out and family acceptance. The series isavailable on our website.

What is the vision that guides your work? What will the world – and specifically Oakland – look like if you are successful?

We envision a world where youth of all sexual orientations and gender identities are accepted and celebrated by their families and communities.

Every day, in Oakland and around the world, children and youth are teased, harassed and subjected to violence because someone thinks they are lesbian, gay, bisexual or transgender. Lesbian, gay and bisexual youth who are rejected by their families have a higher risk of depression and attempted suicide than youth who are accepted or celebrated by their families. Somos Familia brings families together to transform this reality by building, culturally responsive, bilingual support for Latinx LGBTQ youth and their families within communities and across generations and creating healthy, safe spaces for LGBTQ youth and their families in community environments (churches, schools, etc.).

Our work is at the intersection of various isolated communities. With Latinx populations growing in the U.S. and LGBTQ, immigrant, and Latinx communities being targeted politically, our work to build community at this intersection is critical. We will be working with TPS Committee for Permanent Residency, which is hosting an LGBTQ-centered TPS Symposium on April 29, 2018, at 5 p.m. at La Peña Cultural Center. We will have several resources for community members with TPS including “Know your rights”, a resource fair, workshops and information for LGBTQ+ people with TPS. In addition, we will continue to work with families and communities through workshops and community events, including Pride in both San Francisco and Oakland, the annual Día de La Familia celebration, and much more.